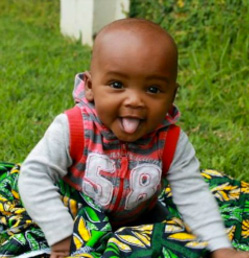 On July 25, 2014, this baby was left on the street in Arusha. The Police were called who then in turn called Michael, from Neema Baby Home to come pick up the baby. By the time Michael arrived the neighbors had identified the mother and she was in Police custody with neighbors standing around and the mother who was crying. The Police took the very young mother who had been living on the street off to jail while Michael and a Neema volunteer took the baby to the car. It was a very sad day for all. Shabani the baby has fit in well at Neema, the mother, even though she had been living on the street, had taken good care of him. He was chubby and smiley and didn’t even have a diaper rash. It is our dream to be able to build a mothering center to help these young mothers who surely do not belong in jail.