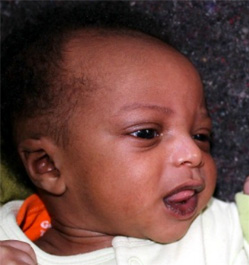 Being Fostered, In Boarding School

Angelous is a twin to Angel who came to Neema House in October after the death of their mother. Their father is very young and unemployed. These babies are the second set of twins now living at Neema. Babies who have to be put on the bottle in Africa due to the death of the mother or as multiple births become “at risk” babies. Formula is much too expensive for Africans whose average monthly salary is less than $100 per month. The twins were being fed cow’s milk and had to readjust to formula. Due to a lack of refrigeration and unsafe drinking water the chances of survival are slim for at risk babies. Neema House is trying to help with this problem. Can you help sponsor this precious baby?

Sponsor a Baby
When you leave this earth you can take nothing you have received, only what you have given.
St. Francis of Assisi