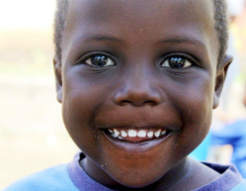 Being Fostered, In Boarding School

Neema Baby Home in Tanzania, East Africa, first learned of Meshack when he was 22 days old. His mother had died and he was living with his grandmother who was feeding him raw cow’s milk. He was dangerously skinny, had skin problems, diarrhea and was not thriving. After nine days in the hospital he came to live at Neema House. After 8 months Meshack was healthy enough to return to his grandmother who had spent a month at Neema learning to care for him. He was doing fine in his home in the village until he began having seizures. He has now returned to Neema and it has been amazing at how well he has fit back in with the other children at Neema. We are researching what his medical problems are and hope to have a solution for his problem. He is a happy boy and loves to play. Please help us by sponsoring him.