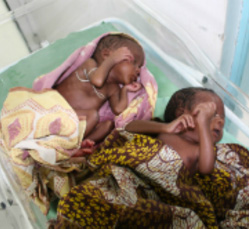 On a trip out to Maasai land with Bahati to see his family, Kelly learned of a new mother in the village who had given birth but her milk had dried up and the babies were in distress. Matt drove back out to the village a few days later and brought the mother and babies in to the hospital. After a few days at the hospital all three were brought to Neema House in Arusha, Tanzania. We are currently trying to build the mother up nutritionally so she will be able to feed both babies but we are not optimistic that she will be able to return with both babies. Many times in multiple birth situations the bigger twin is fed more and the little one is left out. We are supplementing with bottles. Both twins have some physical problems that will require some medical attention. In the above picture you can see their thumbs are stuck to their palms. Neema House could certainly use your help taking care of these babies and their mom.