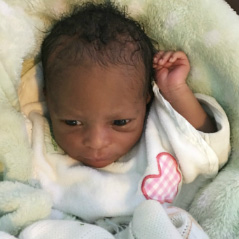 Loi was brought to Neema with his twin shortly after his birth out in a remote Masaai village. His twin was born first and then 4 hours later Loi was born and then his mother died. He has some major injuries to his head probably from crude forceps used according to the doctor.

Unfortunately both boys were very sick when brought to Neema and were both put in the hospital where sadly the older twin later died. We lose so many mothers and babies during childbirth.

Loi will take a lot of special care at Neema and we need your help.