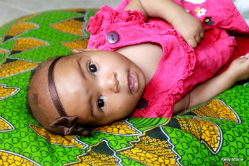 Baby Jemma is approximately three months old. (Born mid January 2015). Her mother abandoned her with some neighbors, and never returned. After three weeks the neighbors brought her to the police, who instructed them to bring her to Neema House. Jemma loves to sleep and eat. She’s a sweet little girl, though a bit underweight, she is eating well and should gain quickly. She loves “talking” and cooing and lots of snuggles.

Would you be her sponsor?