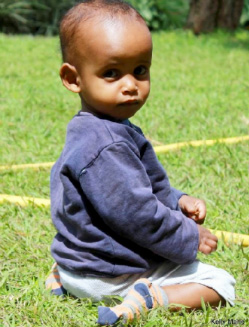 Meet Amani (peace)! He is estimated to be just over a year old (April 2014). His mother abandoned him with a neighbor and said she was going to the store and then never returned. The neighbor took care of him for a week and then decided the mother was probably not coming back. He’s having a bit of a hard time adjusting, and is quite underweight but he’s starting to smile more and open up.